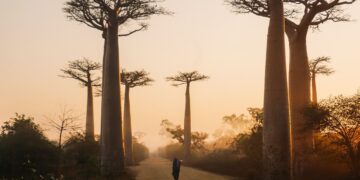 by Reiya Gorai
in General, Traveling
0

Most of the traveler love nature and natures come from beautiful trees. When observing nature, one can often feel overwhelmed by its beauty and magnitude. In a forest, trees often act as guardians and protectors. Some trees in this selection are older than our civilizations and taller than our buildings. Here are the few most beautiful trees in the world.

The Ponthus beech in the Paimpont forest

Located in Brittany, the forest of Paimpont would be the mythical forest of Brocéliande, which one crosses in the tales of King Arthur. At the heart of this forest stands the Beech of Ponthus, a beech of more than 4 meters in circumference and sprawling branches.

In India, it was even decided to make these beautiful trees the national tree. Located in Calcutta’s outskirts, this fig tree of the banyan trees (a caste of Indian merchants) is 250 years old and has a gigantic trunk 131 meters in diameter.

The Dragon Trees of Socotra

The island of Socotra in Yemen is home to the Dragon Trees, trees that resemble mushrooms with bare branches and foliage at the end. Their resin, very rare, called dragon’s blood, is collected once a year and used in traditional medicine.

In the United States, in Charleston, South Carolina, stands the Angel Oak, a venerable oak whose branches extend over 1,600 square meters. It would be 1400 years old, long before creating the United States or the discovery of Christophe Collomb. It is considered one ofthe most beautiful trees.

The baobabs of Madagascar

The island of the Indian Ocean welcomes on its land magnificent baobabs. Near Morondava, they form the Allée des Baobabs, a succession of ten Baobabs from Grandidier, which reach up to 30 meters in height and 7.5 meters in diameter.

115.5 meters is the tallest tree in the world, Hyperion, a redwood tree in Northern California. A tree that would rival a lot of towers in a business center.

The Dark Hedges of Northern Ireland

In Northern Ireland, this one in beautiful trees, beech alley forms a dark and eerie tunnel when the sky is gray, bright and magical when the sun comes out. This alley was featured in the Game of Thrones fantasy series.

The giant wisteria of Japan

Large wisteria is common in Japan. With nearly 2,000 square meters in circumference, the oldest wisteria in Japan is 144 years old! It is supported by a metal structure to promote its maintenance.

In Portland, Oregon, the Portland Japanese Garden is one of the most beautiful Japanese gardens outside of Asia. It hosts many Japanese maples with foliage in shades of green and pink.

Even though conifers don’t give off attractive colors like the Japanese maple, its all-season foliage can be used to beautify patios and nooks and crannies. Its specificity lies in the fact that it focuses more on form than on flowering. Moreover, this characteristic allows it to blend well with the modern design of the garden.

If previously citrus fruits were mostly planted in the ground, today, crops have changed a lot. Put your citrus fruits (lemon, mandarin, or calamondin) in a pot and maintain them passionately. The bright colors and striking smells of this fruit tree will give a little pep to the modern garden’s clean/minimalist style. However, it should be remembered that fruit garden trees require more maintenance, so you should always discuss how to do it with your gardener.

The orange tree is only compatible with certain places in the Mediterranean area.

The large-flowered magnolia or tulip laurel

As the name suggests, the Large-flowered Magnolia is well known amongst pretty trees for its decorative white flowers. Although the Magnolia Grandiflora can reach a height of 20 meters, it can be practiced in bonsai culture. It can then be installed on the balcony or the terrace to give more charm to the modern garden.